While wandering through the mountains of Northern California recently, I had the pleasure of meeting a most unusual and fascinating plant. A week before, I received an anecdotal report of ‘fields of carnivorous plants’ in the mountains near Shasta Lake, terrifying the reporter for fear of being consumed by these botanical beasts. Not able to stand idly by while fair maidens are in distress, I did what any self-righteous naturalist knight would do – I saddled up my trusty steed, grabbed my camera and field guides, and rode north.
At first view, the cobra lily (which isn’t a true lily at all, but sure sounds menacing with such a name) is an imposing image – large, tubular leaves jut from the soggy soil, curled at the top as if ready to strike the nearest passerby and swallow them whole. Upon closer inspection, however, this large member of the pitcher plant family (Sarraceniaceae) shows itself as being completely harmless and even fragile – unless you are an insect. 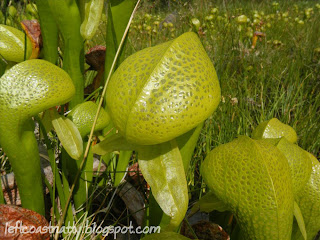 Carnivorous plants have a notorious reputation, thanks in part to 'Audrey II' from the Broadway musical and subsequent cult film Little Shop of Horrors. Images come to mind of the monster crying out “Feed me, Seymour!” and then swallowing victims whole (or perhaps chewing a little bit). Audrey II was an overgrown Venus flytrap, however, which is an entirely different family of plants with very different eating habits.
Pitcher plants do not actively close around their prey; rather they rely on sights and scents to trick insects into their trap, after which entering there is little chance of escape. The cobra lily masterfully exemplifies this evolutionary strategy – a bulbous, tubular leaf is topped with downward-curved hood, under which is the opening to the trap. On either side of the hood, ominous ‘fangs’ jut out, presumably guiding hapless insects inside. Once inside the leaf it is extremely difficult to escape, thanks to downward-pointing hairs, slimy secretions, and false exits – small translucent spots on the leaf that confuse insects. Eventually, the victims become exhausted and slide down into the base of the leaf, where they meet a slow demise in a pool of digestive enzymes. Sound like a fantastic horror movie? Darlingtonia is the real thing.
Why all the fuss for a little insect meal? This carnivorous wonder grows only in acidic bogs and seeps, typically nutrient poor and lacking in nitrogen. By trapping and digesting insect prey, the plant supplements its growing conditions with the nutrients from its prey. Inside the leaf trap are the same cells found on the root hairs, those responsible for absorbing nutrients.  Through an improbable evolutionary twist, the pitcher plant has secured itself a niche in an otherwise challenging growing environment.
Speaking of growing environments, you’re probably wondering: alright LCN, where can I find this exquisite monster of a plant? Darlingtonia has a limited range: scattered clusters grow in the northern Sierra Nevada and throughout the northern California and Oregon Coast ranges, from Lake Shasta north to Tillamook County. Due to its extensive adaptations for growing in acidic seeps, it is restricted to such areas. The population I encountered was growing happily in a steep mountain meadow, filled with cascading cold spring water and possessing an entirely unspoiled view of Mt. Shasta. The cobra lily also occurs in flat bogs along the Oregon coast, and even has its own Oregon State Park. Because of its habitat limitations, it is considered UNCOMMON by our dear friend Mr. Jepson; in fact in the California Herbaria files the samples have their coordinates deleted from public viewing, to deter would-be plant pilferers the likes of the Orchid Hunter. The plot around this mysterious plant thickens…
There is yet more mystery buzzing around the cobra lily, and that is the matter of its pollinator(s). To date, NO POLLINATOR has been reliably observed on the plant’s inflorescence, which thrusts into the air at the first sign of spring and by May has a pendant, red flower dangling from a 70 - 80cm tall scape. Many have been proposed, from common spiders to undiscovered species of bees, but none have been caught in the act. This, in a state with some of the most thorough botanical collections in the world, comes as a surprise to me.
From undisclosed pollinators to wicked, insect-murdering leaves, there are many reasons to seek out the elusive cobra lily. But with picky growing conditions, hidden habitats, and general mystery surrounding it, you may be searching for a while. Enjoy the hunt.