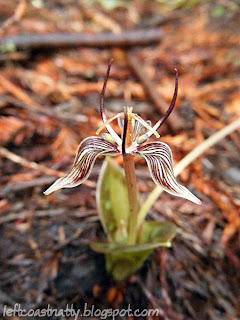 As the haze of winter in the Santa Cruz Mountains rolls on, one cannot help but look ahead to the sunny springtime. The fog lifts, the days become longer, and wildflowers begin to replace mushrooms as the main feature in the forest, signifying brighter and warmer times. But if it is wildflowers you are seeking, you don’t have to wait until the warmth of spring. Rearing out of the soggy soil of the Coast Ranges is one of the first wildflowers of the year, and one of the more unique – a stinky little flower affectionately called Fetid Adder’s Tongue.
A member of the Liliaceae family, Fetid Adder’s Tongue can be easily spotted sprouting on the forest floor thanks to its unique leaves and flowers. Appearing first are two mottled green and brown basal leaves, which open up to reveal the pedicel (the flowering stalk). Atop the pedicel is the inflorescence which, as with most members of the Lily family, has floral parts in groups of three. What appear to be three large, maroon-striped petals are actually the sepals – petal-like appendages occurring below the flower. The true petals are smaller and maroon-tipped spikes surrounding the three-part stigma. Around the stigma are three anthers, which hold the flower’s golden pollen.
If you bend down and take a whiff of this beautiful inflorescence, you may be slightly appalled.  Distributing the pollen are not the usual butterflies or bees, but slightly under-appreciated pollinators whom are attracted to the flower’s rank scent – fungal gnats. The gnats swarm the ripened flowers, spreading the pollen to nearby plants and ensuring future generations of the species. Fetid Adder’s Tongue is self-incompatible; meaning without its unlikely pollinators to spread its genetic material, it would not reproduce. [Fungus gnat from WikiPedia]
The genus name Scoliopus (Greek for ‘curved foot’) comes from the shape of the pedicel after the fertilized seed pod ripens. Under the weight of the developed seeds, the pedicel bends down and touches the ground, at which point ants, slugs, and other forest floor fauna distribute them to new locales, spreading Fetid Adder’s Tongue across the understory.
Fetid Adder’s Tongue is a common occurrence within its small range – this species only grows in the Coast Ranges from Santa Cruz County north to Humbolt County (with possible disjunct populations in southern Oregon). It prefers moist, highly shaded areas such as the redwood forest floor, and uses its early blooming strategy to capitalize on the available sunlight in the winter before other plants have come into leaf [the author found the first blooms on January 13th, but this species has been reported to flower as early at December 15th]. In Henry Cowell Redwoods, populations occur throughout the park under the redwood canopy.
This little ill-scented flower may be both early and unusual, but its appearance is symbolic of the beginning of a new season in the forest. The annual blooming of Fetid Adder’s Tongue sends out a clear message to those who take time to interpret it: Spring is on the way.
[originally published in Words of the Woods - the newsletter of Henry Cowell Redwoods State Park - February 2010]
Posted by Trent