Autumn in the is a time of change. Temperatures drop, daylight recedes, and the valleys begin to fill with moisture. Amphibians begin appearing from their summer sabbaticals, and our few deciduous trees add a splash of color to the usual sea of green. Bigleaf maple, boxelder, and buckeye slowly change, their leaves becoming a brilliant display of pigments before finally falling. 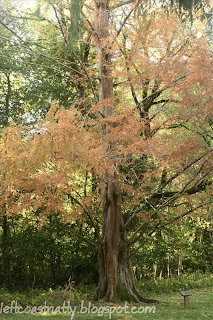 In Henry Cowell Redwoods State Park there is another unique display of fall foliage. In a corner of the meadow, a scene from the mountains of is materializing. Peeking above the entrance kiosk, our dawn redwood has lit up the canopy with its golden-orange foliage.
Such a display would have not been believed possible 70 years ago - the dawn redwood (Metasequoia glyptostroboides) was believed to be extinct. It was known only from the fossil record, having disappeared from the Northern hemisphere’s temperate forests some 20 million years ago. But in 1944, Chinese forester Zhan Wang discovered a large tree in the that he could not identify in the field. Upon consulting with university experts, the tree was identified as Metasequoia, a living fossil.
After the discovery, the dawn redwood almost immediately earned celebrity status; the ‘lost’ member of the redwood sub-family became cultivated all over the world as an ornamental tree, and today can be spotted at opposite ends of the globe from its native home in China.
Recently re-classified as a member of the cypress (Cupressaceae) family based on DNA analysis, the dawn redwood is a close relative of both the coastal redwood and the giant sequoia – in fact, these three trees currently compose the Sequoioideae subfamily of the cypress family. But while the bark and cones of the dawn redwood are similar to those of its two brethren, one main difference becomes strikingly clear in the fall: the dawn redwood is deciduous. 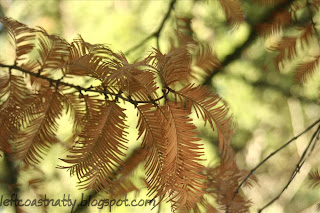 The falling of a deciduous plant’s leaves, also known as abscission, is a complicated biological process. As days get shorter and nights become cooler, deciduous leaves slow down and eventually stop producing new chlorophylls to replace those spent during photosynthesis. As the chlorophylls decrease, the leaf’s green color slowly fades and allows colors from other pigments to become apparent. Anthrocyanin is the pigment responsible for red and purple colors, and is produced by sugars trapped in the leaf during abscission. This provides the rather rare burnt red-orange color of the dawn redwood’s autumn foliage.

The abscission is completed when the leaf detaches from the branch and falls to the ground, giving rise to the 16th century English expression “fall,” which we now frequently use to denote the autumn season in . And when the leaves are lying on the ground, and the bare branches tremble in the cold breeze, winter has arrived.

[originally published in Words of the Woods, the newsletter of Henry Cowell Redwoods State Park - December 2009]
Posted by Trent